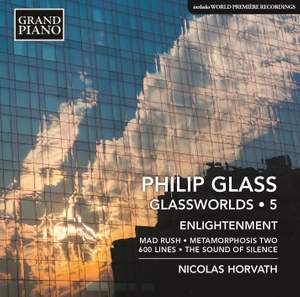 There is a purity that is astonishing and Horvath’s concentration does it full justice — International Piano, February 2017,

The works in this programme demonstrate Philip Glass’s perpetual goal of connecting with his audience. Taking shape as something like a hidden sonata form, Mad Rush contrasts peaceful atmosphere with tempestuousness and mesmerizing beauty. The last of its kind in Glass’s oeuvre, 600 Lines, here receiving its première recording on solo piano, is an obsessive and hypnotically restless toccata that represents the zenith of his experiences while working with Ravi Shankar. These two monumental works are joined by première recordings of the subtly transformed Metamorphosis 2, and Glass’s only transcription in the form of Paul Simon’s The Sound of Silence.

Recognized as a leading interpreter of Liszt’s music, NICOLAS HORVATH has in recent years become one of the most sought after pianists of his generation. Holder of a number of awards, including First Prize of the Scriabin and the Luigi Nono International Competitions, he frequently organizes events and concerts of unusual length, sometimes over twelve hours, such as Philip Glass’ complete piano music or Erik Satie’s Vexations, and composers from a number of countries have written for him.

Nicolas Horvath is a Steinway artist.