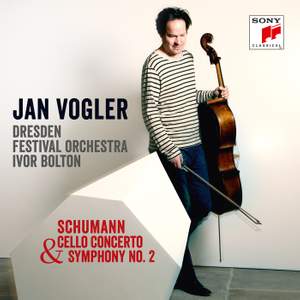 Schumann: In Search of Original Sound

Vogler – placed ideally against the orchestra, his sound growing naturally out of the tuttis – shows few signs of awkwardness in Schumann’s challenging writing…Ivor Bolton makes the most of Schumann’s... — Gramophone Magazine, February 2017 More…

German cellist, Jan Vogler presents his 2nd recording of Schumann's Cello Concerto (1st recording on Edel, 2001) but this time with his own orchestra, the Dresden Festival Orchestra, (alongside Ivor Bolton), that consists of more than 50 members from Europe's most renowned early music ensembles. Exploring Schumann's "original sound", Jan Vogler plays on gut strings and the orchestra on period instruments. In addition to the cello concerto, the orchestra is playing Schumann's 2nd symphony. The repertoire connects the Dresden Music Festival and its orchestra to the productive Dresden period of Schumann's work (1844-50) since both works were composed during that time. The second Symphony was written between December 1845 and October 1846 in Dresden, the cello concerto immediately after he had left the city.

Vogler – placed ideally against the orchestra, his sound growing naturally out of the tuttis – shows few signs of awkwardness in Schumann’s challenging writing…Ivor Bolton makes the most of Schumann’s obsessive rhythms [in the Second Symphony] and shapes the insistent counterpoint of the finale so that the arrival of the near-quote from Beethoven’s An die ferne Geliebte seems to occur with divine inevitability