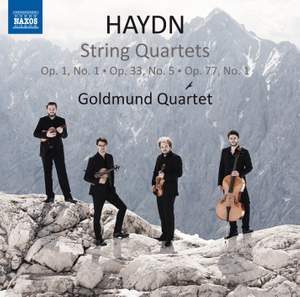 Their rapport tells in the unanimity, balance and radiance of their articulation and sound, while their wide variation of nuance, colour and vibrato suggests a searching musicality — BBC Music Magazine, January 2017, 4 out of 5 stars More…

Joseph Haydn claimed to have discovered the string quartet form by accident. His Op.1 no.1 has the cheerful five-movement form of a Divertimento, while the glorious and harmonically daring Op.77 no.1 was among the last he completed in the genre. Falling between the two, Op.33 no.5 is full of rhythmic surprises and a theme that gives it the nickname, ‘How do you do?’

Today, the Goldmund Quartet is considered one of the most exciting young string quartets in Europe. Since their début at Munich’s Prinzregententheater, the quartet has appeared at international festivals such as the Festival Aix-en-Provence, Festival de Música y Danza Granada, Ludwigsburger Schlossfestspiele and Heidelberger Frühling. The quartet has been awarded several prizes, including a Yehudi Menuhin Live Music Now scholarship, and recently a scholarship from the Deutscher Musikwettbewerb as well as the 2015 Bavarian Young Artist Award. Concert recordings have been made by the Bavarian Radio, ARD, Deutschlandradio and Einsfestival.

Their rapport tells in the unanimity, balance and radiance of their articulation and sound, while their wide variation of nuance, colour and vibrato suggests a searching musicality

The Goldmunds make a beautiful sound, elegant and transparent, with a real sense that these four players are friends both on off the concert platform.

an auspicious beginning which I enjoyed very much. They have the measure of Haydn from all three periods and I hope to hear more of them in his and other music. Naxos have a knack of discovering new talent…it’s particularly recommended to those not yet familiar with his string quartet output. With attractive performances and good recording…