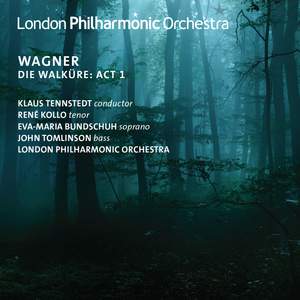 The chief cause of ecstasy is the inspired playing of the LPO, whose intensity is electrifying: the opening storm is enough to show what we can expect, and despite the broad tempos – this is... — BBC Music Magazine, Christmas 2016, 4 out of 5 stars More…

This recording features former Principal Conductor and Music Director of the London Philharmonic Orchestra, the late Klaus Tennstedt, whose tenure with the LPO was characterised by his specialism in German repertoire.

Released from the London Philharmonic Orchestra’s archives for the first time, Wagner’s Die Walküre is one of the world’s most popular operas. Heard here, Act 1 is often performed alone in concert; it is a rich concentration of human love, loyalty and blood ties, packed full of thrilling music, revealing Wagner’s assured grasp of orchestral colouring and musical opulence.

This concert performance is vividly brought to life by Klaus Tennstedt and three of the greatest exponents of these roles in recent times – René Kollo, Eva-Maria Bundschuh and John Tomlinson.

The three soloists featured on this release are especially known for their Wagnerian roles; René Kollo sang Erik in The Flying Dutchman at Bayreuth in 1970; Eva-Maria Bundschuh also sang roles from Senta in The Flying Dutchman through to Venus in Tannhäuser. John Tomlinson performed for eighteen consecutive seasons at the festivals of Bayreuth.

This recording marks the sixteenth release with Klaus Tennstedt on the LPO Label since it was established in 2005; his first was a 1992 recording of orchestral excerpts from Wagner operas released in May 2005.

This recording is taken from live concert performances at the Southbank Centre’s Royal Festival Hall on 7 and 10 October 1991.

The chief cause of ecstasy is the inspired playing of the LPO, whose intensity is electrifying: the opening storm is enough to show what we can expect, and despite the broad tempos – this is one of the slowest performances I have heard – tension doesn’t resolve until the last off-beat chord

The secret of this long-lost performance lies in its casting: three singers who, together with their conductor, are compelling storytellers in music…Tennstedt makes sure that everyone playing or singing is given cannily judged musical time. His phrasing is both attentive to the drama and in parts spaciously luxuriant, although a forward pulse is never lacking…a well-worked triumph for its intelligent and experienced performers

It is a unique example of Tennstedt’s way with a complete act of Wagner, and as such it is indispensable.

Tennstedt certainly gives it a compelling sense of sweep and cohesiveness in an account that is distinguished by a refreshing lyrical generosity and some fabulous playing from the LPO.

this 1991 concert performance still sweeps you away, such is the beauty of the LPO’s playing, and such is Tennstedt’s command of dynamics and passionate engagement with Wagner’s music at the zenith of its mastery.

Kollo, Bundschuh and Tomlinson, if not ideal, catch the excitement of Tennstedt’s conducting in this 1991 live recording.

Tennstedt conjures an intensity and concentration from his devoted players that belies the physical challenges he was facing. Recommended.