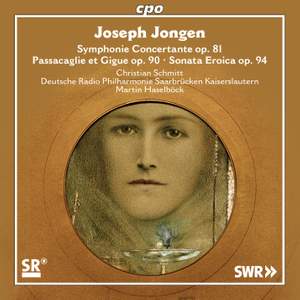 Since concertos for organ and orchestra are rare finds, it is no doubt Joseph Jongen’s Symphonie concertante, op.81, that has kept his name alive beyond Belgium’s borders. The three works recorded on this CD concentrate on the organ, the orchestra, and interaction between the two. Jongen has repeatedly been likened to his fellow Belgian César Franck, and the Sonata eroica concluding this CD is perhaps his most important solo organ work - even without the orchestra it might succeed in restoring the queen of instruments to its rightful place in the concert hall!

Performed on the Karl Schuke-Orgel of the Philharmonie Luxembourg

A highly recommendable tribute to the Belgian composer

A worthy tribute all-round to a much neglected figure.