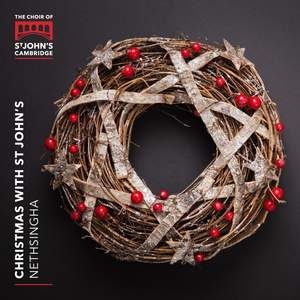 There are treasures [here] not least the rapt performances of Cornelius’s The Three Kings, where Peter Lidbetter is an eloquent soloist, and a delicately inflected, touching account of Elizabeth... — BBC Music Magazine, Christmas 2016, 4 out of 5 stars More…

Rütti: I wonder as I wander (version for choir and organ)

Warlock: As dew in Aprylle

Milner, Anthony: Out of your sleep arise

Christmas presents a golden opportunity to present brand new music to wide audiences, and the role played by St John’s College Choir in this area has been significant, as demonstrated by this new recording of contemporary choral works.

Featuring two works commissioned by the choir – Judith Bingham’s 'The Clouded Heaven' and Michael Finnissy’s 'John the Baptist'. The programme begins with Bob Chilcott’s 'The Shepherd’s Carol' commissioned by Stephen Cleobury (a former St John’s organ scholar) for King’s College Choir, and ends with 'Creator of the Stars of Night', composed by another former St John’s organ scholar, John Scott. The Choir of St John’s College, Cambridge is one of the finest choirs of men and boys in the world, known and loved by millions from its recordings, broadcasts and concert tours. A cornerstone of the great English choral tradition since the 1670s, the Choir is recognised for its distinctive, rich and expressive sound and is today directed by Andrew Nethsingha.

There are treasures [here] not least the rapt performances of Cornelius’s The Three Kings, where Peter Lidbetter is an eloquent soloist, and a delicately inflected, touching account of Elizabeth Poston’s Jesus Christ, the Apple Tree. Excellent engineering captures evocatively the atmosphere of St John’s College chapel

An evocatively sung collection from the Cambridge choir glowing with devotional joy.

Throughout this programme the choral singing is marvellous. Andrew Nethsingha inherited a choir with a great tradition of excellence going right back to the days of George Guest but he’s clearly put his own stamp on the choir...I must single out the trebles for particular praise. The sound they produce is keen and very well focused.

Under Nethsinga, St John’s Choir rides high among the Cambridge colleges...Nethsinga’s programming is eclectic while retaining a “traditional” core.

a meticulously sung carol collection...Most arresting is O Oriens, by Cecilia McDowall, a beautiful setting of an Advent antiphon.