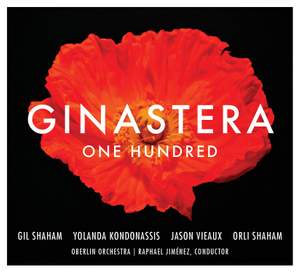 for those new to Ginastera’s music, this varied programme would be a fine place to start. Guitar lovers, in particular, should not hesitate to hear Vieaux’s masterful performance — Gramophone Magazine, December 2016

Throughout his musical career, Argentinean composer Alberto Ginastera artfully incorporated the folk music and dance forms of his native land into increasingly modernist creations. From the populist to the avant-garde, his work was created using an architectural approach that effectively set his music apart. Ginastera: One Hundred is released in celebration of the centennial anniversary of Ginastera’s birth. The work serves as a musical ‘thank you’ from world-renowned harpist Yolanda Kondonassis, whose career has been heavily influenced by Ginastera. She has performed his Harp Concerto nearly 200 times. Alongside the Harp Concerto is Danzas Argentinas, with its themes that evoke Argentinean history and culture juxtaposed with modernist structures. This is the work which catapulted Ginastera into fame in his home country. Finally, Pampeana No. 1 shows influences from Aaron Copland, with whom Ginastera studied, and Sonata for Guitar, which is the composer’s only work for Argentina’s national instrument.

for those new to Ginastera’s music, this varied programme would be a fine place to start. Guitar lovers, in particular, should not hesitate to hear Vieaux’s masterful performance