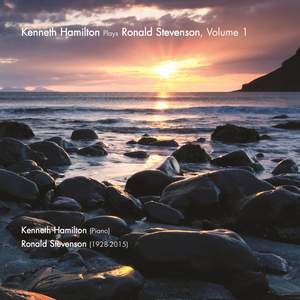 No. 2. The Dowie Dens O'Yarrow

Stevenson, R: Chorale and Fugue in Reverse on Themes of Robert and Clara Schumann

Tauberiana (My Heart and I) (arr. R. Stevenson for piano)

Scottish pianist Kenneth Hamilton performs works by Ronald Stevenson (1928-2015), a hugely influential but contentious composer, on the first volume in a series for Prima Facie.

Ronald Stevenson was a respected but contentious figure in the cultural life of Scotland and the UK as a whole. His multifarious musical passions, the wide scope of his output, and his outright rejection of the more alienating elements of contemporary Western composition had led him to be labelled by some as a neo-Romantic reactionary (especially ironic, given his left wing social and political views) or even as a socialist-realist composer (which at least took into account these views).

But Stevenson had been born out of his time, as the aesthetic winds were then blowing in a direction that he found distinctly uncongenial. A generation of slightly younger students from the same music college, most prominently Harrison Birtwistle and Peter Maxwell Davies (both born in 1934), would go on to represent the so-called New Manchester School of musical modernism, while Stevenson carried on in a decidedly different vein. Despite this, the sheer scope, power and mastery of his Passacaglia on DSCH (1963) finally brought him international recognition.

Scottish pianist Kenneth Hamilton, himself a student of Ronald Stevenson (and of Lawrence Glover) performs worldwide as a recitalist, concerto soloist and broadcaster. He was described after a concerto performance with the St Petersburg Symphony Orchestra as “an outstanding virtuoso – one of the finest players of his generation” (Moscow Kommersant), by the New York Times as a performer “full of energy and wit”, and by the Singapore Straits Times as “a formidable virtuoso”. He’s appeared frequently on radio and television in Britain, the US, Germany, Canada, Australia and Russia, most recently as soloist in Chopin’s First Piano Concerto with the Istanbul Chamber Orchestra on Turkish Television, and as pianist and presenter of the TV programme “Mendelssohn in Scotland”, broadcast in Europe and the US by Deutsche Welle Channel.

Hamilton is a familiar voice on BBC Radio 3, and has numerous festival engagements to his credit. Well-known also as a writer on pianists and pianism, he is Professor of Music at Cardiff University. His last book, ‘After the Golden Age: Romantic Pianism and Modern Performance’ (Oxford University Press) was welcomed as “full of wit and interest, and written with passion” by Charles Rosen in The Times Literary Supplement and as “a wonderful book” by James Fenton in The Guardian.