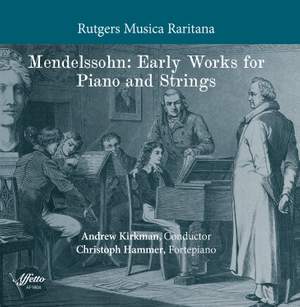 Since their revival in the latter portion of the twentieth century, these pieces have been performed a number of times. This particular recording, however, stands apart from the rest due to its impeccable attention to the performance practices of Mendelssohn’s time. + These works are performed on a replica of an 1815 six-octave Streicher grand piano, which is very close to what was actually used by the young child prodigy. These musicians also follow Mendelssohn’s practice of utilizing the keyboard in the concerto tuttis as well as the solo part. The orchestra plays on gut strings with Tourte-style bows. + The Piano Concerto in A minor was written for Mendelssohn’s sister, Fanny in 1822. The Sextet was written two years later, and is the first foreshadowing of the vigorous energy and shimmering textures which would soon mark Mendelssohn’s unique personal style.