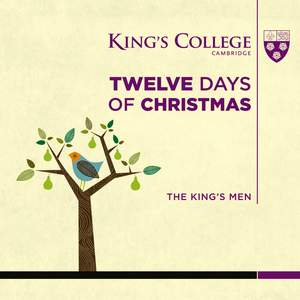 Walter Afanasieff, Mariah Carey: All I Want For Christmas Is You

Kirkpatrick: Away in a Manger: Away In a Manger

Roy Wood: I Wish It Could Be Christmas Every Day

The King’s Men is the close-harmony vocal group formed by the current choral scholars of King’s College, Cambridge. Following on from the success of their 2014 release, 'After Hours', which topped the iTunes Classical Charts in June 2014, for their latest album on the college’s own label, the King’s Men showcase the lighter side of their seasonal repertoire, performing a mixture of Christmas tunes you won’t be hearing in 'Nine Lessons and Carols' any time soon.

Highlights include traditional favourites such as “Rudolph the Red-nosed Reindeer” alongside Pat Dunachie (now first alto in the King’s Singers) channelling Mariah Carey on “All I want for Christmas is You” and Keith Robert’s jocular arrangement of “12 Days of Christmas”.

Unlike many close-harmony groups, the King’s Men record together, balancing their voices acoustically instead of tracking each voice individually. What this approach sacrifices in precision, it more than makes up for in musical cohesion. Whether you’re dreaming of a white Christmas, drowning in Christmas cards, waiting to catch a glimpse of Rudolph’s red nose or simply wondering when all of those lords will stop a-leaping all over your lawn, this is an essential addition to your Christmas playlist.

The King’s Men ensemble have appeared on prime-time television, including BBC’s The One Show and regularly promote their releases in-store and online. Trailers for their previous release, 'After Hours', have proved incredibly popular, receiving over 40,000 views on their YouTube channel, and 'Twelve Days of Christmas' will receive similarly strong support.