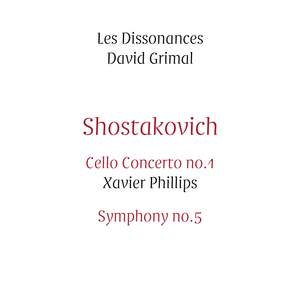 Shostakovich: Cello Concerto No. 1 & Symphony No. 5

Chamber music writ large is certainly what we get from principal cellist Xavier Phillips, soloist in Shostakovich’s First Cello Concerto…there are many strong, unique features, starting with... — BBC Music Magazine, January 2017, 3 out of 5 stars More…

Les Dissonances made its first recordings for Ambroise-Naïve, the critical success of which led to the birth of its own label in March 2014.

To celebrate its 10 anniversary, the orchestra’s new Shostakovich album, recorded live at the Opéra de Dijon, is presented complete with an extended tribute piece by Xavier Phillips in memory of his mentor, Mstislav Rostropovich, dedicatee of Shostakovich’s two cello concertos. It follows the label’s high production and design values, offering the disc as part of a hardbound book containing detailed programme notes, Phillips’ essay, artist biographies and monochrome photographs.

"My memories are of an immensely gifted pedagogue, whose advice could be very diverse in nature. With me his approach wasn’t really focused on the instrumental dimension. It was above all a way of talking about music, with images, impressions, sensations, anecdotes. He shed new light, he showed you things, he made you think". Xavier Phillips

Chamber music writ large is certainly what we get from principal cellist Xavier Phillips, soloist in Shostakovich’s First Cello Concerto…there are many strong, unique features, starting with a peerless oboe solo that is given space to manoeuvre. The other woodwind shine and the strings in the slow movement build from vibrato-free antique style to as intense a climax as any I’ve heard

an interesting – and often transparent – approach to both the symphony and the concerto, well worth sampling, certainly if you normally find Shostakovich’s bigger-scale music excessively dark or overbearing

Les Dissonances, with Xavier Phillips in the concerto, perform Shostakovich with intelligence and spirit providing an excellent performance which does its players credit.

the performance is full of artfully paced crescendos, and there is convincing momentum and drama here even if the interpretation is ultimately less gruelling than some.

this performance by Xavier Phillips speaks of connection and profound understanding. He performs with the excellent self-directing French ensemble Les Dissonance and there is a gripping synergy in the hard-hitting energy of the opening movement, languid lyricism of the second and the haranguing grotesquerie of the finale.

This brings out the best of his playing, he is extremely refined and has a wonderful depth and purity to his sound.