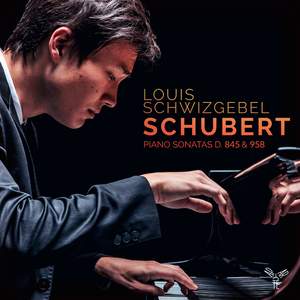 Schwizgebel is in full command, avoiding the point-making that often intrudes in accounts of this music, but subtle enough not to make one weary…if you don’t know these two works, this disc is... — BBC Music Magazine, February 2017, 4 out of 5 stars More…

In this eagerly awaited solo album for the enterprising Aparté label, Louis Schwizgebel appropriates two gems of piano repertoire: Sonata D845 (no. 16) in A minor, considered the first of Schubert's maturity, impresses with the mastery of its structure and its expressive power. Worthy of a symphony, D958 in C minor, 19th out of the 21 that he composed, symbolises the mastery of the composer, freed from the weight of his admiration for Beethoven.

Enhanced by recording quality featuring an extraordinary harmonic palette that will delight the most demanding audiophile, this project promises to be one of the finest piano CDs of the year. Louis Schwizgebel makes his debut in the International Piano Series on December 2nd at St Johns Smith Square, playing Sonata D958 and discussing his programme in the free pre-concert talk. The Swiss pianist won second prize at the Leeds International Piano Competition in 2012, and soon afterwards became one of the BBC’s New Generation Artists. Acclaimed by The Guardian as "a pianist with a profound gift", he presents music by some of the piano repertoire’s greatest composers.

Schwizgebel is in full command, avoiding the point-making that often intrudes in accounts of this music, but subtle enough not to make one weary…if you don’t know these two works, this disc is an admirable and very well-recorded introduction to them

His clarity, matched by Aparté’s engineering, doesn’t mean a lack of weight of force, his patience doesn’t preclude excitement, and the pearly delicacy Schwizgebel gets from his instrument’s higher register doesn’t mean decorousness, not least because he peppers his light textures with mischievous, stinging accents…a refreshing and rewarding disc

It’s wonderful to see him [Schwizgebel] tackling Schubert … he should have opened with the A minor Sonata where we hear more of the limpid, near-transparent piano tone he so successfully makes his own. The heartbreaking ending of the A minor is unfolded magically