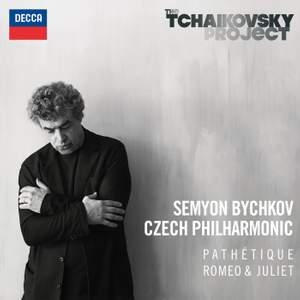 Bychkov’s Russian roots make him mindful of Tchaikovsky’s classicism, the emotion always ‘contained’ until it can be contained no more. The explosive development section is a controlled panic... — Gramophone Magazine, October 2016 More…

“What is this music that we love so deeply if not our beloved friend? I’ve loved Tchaikovsky’s music ever since I can remember. Like all first loves this one never died” [Semyon Bychkov]

Cementing their new relationship with Decca Classics, the Czech Philharmonic embark on a cycle of Tchaikovsky’s Symphonies under the baton of Semyon Bychkov.

This first release showcases Tchaikovsky’s greatest Symphony, the Pathétique. Tchaikovsky himself felt that his Sixth Symphony, a confident and dramatic work, was “the best thing I have composed”. This outstanding recording is paired with Tchaikovsky’s magical Fantasy Overture, Romeo & Juliet.

Volume 1 marks the start of Decca’s first Tchaikovsky cycle for nearly 40 years (and the first in high-definiton 96k/24bit sound). Future recordings – covering all Tchaikovsky’s Symphonies, Piano Concertos, and other orchestral works – will follow as Maestro Bychkov delves deeper into the composer’s life and music, supported by innovative concert programming in major cities across the world.

The first of three Tchaikovsky Project concerts takes place in London in October 2016. In January/February 2017, Bychkov takes the project to New York.

Bychkov will continue to champion Tchaikovsky’s music over the next few years, with further Tchaikovsky residencies planned in London, New York and Prague, plus Tchaikovsky Project concerts in Vienna and Paris.

Bychkov’s Russian roots make him mindful of Tchaikovsky’s classicism, the emotion always ‘contained’ until it can be contained no more. The explosive development section is a controlled panic attack, classical in form, neurotic in nature…a very fine performance…and supplemented by a Romeo and Juliet of similar qualities – keen and articulate in strife, rich in romance. And it feels personal in a way that the warm, homespun playing of the Czech Philharmonic only accentuates

these are musically intense and illuminating readings superbly played and clearly and openly recorded...There is no doubt in my mind however that this beginning to Semyon Bychkov’s Tchaikovsky Project series whets the appetite for further recordings.