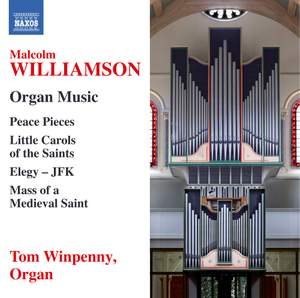 This music is lucky to have such a conscientious advocate. Winpenny presents it all with clinical technical precision and close attention to textural detail, easily moving between moments of... — Gramophone Magazine, December 2016 More…

Book 2: No. 6. The Peace of God that Passeth All Understanding

Williamson: Little Carols of the Saints

No. 1. The Magdalene in the Garden

No. 2. Francis of Assisi

No. 4. Ignatius the Soldier

Williamson: Fantasy on 'This is my Father's World'

Williamson: Mass of a Medieval Saint

One of Australia’s greatest composers, Malcolm Williamson settled in Britain and rose to the position of Master of the Queen’s Music in 1975. He was championed by a number of prominent musical figures and wrote in almost every genre. A skilled keyboard player and a Catholic convert, he wrote for the organ throughout his life and these works reveal his deep immersion in religious music, initially inspired by Messiaen. His instinct for dramatic bravura and colourful registrations can be heard in Résurgence du Feu (Pâques 1959) whilst the beautiful poetic miniatures Little Carols of the Saints reveal deeply human qualities, elements developed more substantially in Mass of a Medieval Saint. Elegy – JFK is fittingly sombre.

This music is lucky to have such a conscientious advocate. Winpenny presents it all with clinical technical precision and close attention to textural detail, easily moving between moments of demanding virtuosity…and almost embarrassing naivety

Let's hope this is the first volume of a complete collection.

These are very fine works from a composer of which we still do not hear enough. Tom Winpenny’s performances are impressive. He is very extremely well recorded and he provides some excellent booklet notes.