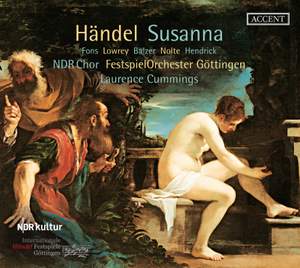 [This recording] is conducted sagely by Laurence Cummings, whose direction is alert to the broad range of dramatic atmospheres, situations, characterisations and musical styles in the oratorio.... — Gramophone Magazine, January 2017 More…

Part I: How long, Oh Lord, shall Israel groan? (Chorus)

Part I: Our Crimes Repeated (Joacim)

Part I: Oh Joacim, When Thou Art By (Susanna)

Part I: When thou art nigh (Susanna, Joacim)

Part I: Live There in Babylon (Chelsias)

Part I: Who fears the Lord may dare all foes (Chelsias)

Part I: When first I saw my lovely maid (Joacim)

Part I: Let Me Confess (Susanna)

Part I: Would custom bid (Susanna)

Part I: Down My Old Cheeks (Chelsias)

Part I: Without the swain's assiduous care (Susanna)

Part I: Source of Each Joy (Joacim, Susanna)

Part I: The parent bird in search of food (Joacim)

Part I: On Joacim may every joy attend (Susanna)

Part I: What Means This Weight (Susanna)

Part I: Bending to the throne of glory (Susanna)

Part I: Virtue Shall Never Longer Be Oppress'd (Chorus)

Part I: Say, is it fit that age? (First Elder, Second Elder)

Part I: The oak that for a thousand years (Second Elder)

Part I: When the trumpet sounds to arms (First Elder)

Part II: Lead me to some cool retreat (Susanna)

Part II: In Vain You Try to Cure (Susanna, Attendant)

Part II: Blooming as the face of spring (First Elder)

Part II: The torrent that sweeps in its course (Second Elder)

Part II: If guiltless blood be your intent (Susanna)

Part III: The cause is decided (Chorus)

Part III: Round thy urn my tears shall flow (First Elder)

Part III: But You, Who See Me on the Verge of Life (Susanna)

Part III: But See! My Lord, My Joacim Appears (Susanna)

Part III: Raise your voice to sounds of joy (Chelsias)

After the patriotic ‘victory oratorios’, the oratorio 'Susanna' marks a turning point in Handel’s composition. This Old Testament narrative is a popular motif in the domain of art history. Many a portrayal exists of the steadfast Susanna being watched – unbeknown to her – by two lusting elders as she bathes. Likewise, the scene of the supposed adulteress appearing before the judges who sentence her to death inspired painters such as Rembrandt, Giorgione, Gentileschi and Corinth. In adopting this as his subject, Handel chose a heroine who is neither a queen nor a prophet.

The piquant account from the Book of Daniel drew from him magnificent inventiveness in the music, which also includes passages in the lighter vein characteristic of the English ‘ballad opera’ popular at the time. Susanna’s virtue, however, is extolled in monumental choruses.

The present live recording is a production of the 2016 International Handel Festival in Göttingen, highly praised by the critics at their performances in Göttingen, Berlin, and Wroclaw. Laurence Cummings, the Festival's Artistic Director, a renowned Händel specialist, stands at the helm of the Göttingen Festival Orchestra, aided by an excellent vocal cast and the NDR Choir.

[This recording] is conducted sagely by Laurence Cummings, whose direction is alert to the broad range of dramatic atmospheres, situations, characterisations and musical styles in the oratorio. Each strand in the ominous Overture is delineated transparently by the Göttingen Festival Orchestra/ The NDR Choir are for the most part adroitly disciplined…this is a valuable new perspective on Handel’s late masterpiece

Cummings’s new version with Göttingen festival forces captures fully the uplifting, pastoral, ethereal vision in arias such as Susanna’s “Crystal streams in murmurs flowing”, and his cast, while not all perfect in English, are responsive, with Ciara Hendrick outstanding. Beautiful.