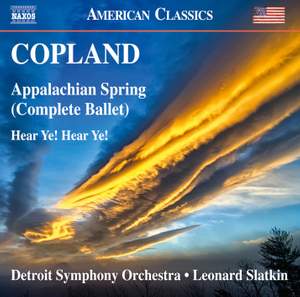 Leonard Slatkin and his Detroit Symphony Orchestra negotiate all this brightly and efficiently. — BBC Music Magazine, December 2016, 3 out of 5 stars More…

Aaron Copland wrote his rarely-heard ballet Hear Ye! Hear Ye! for Ruth Page, the dancer and choreographer who was to become the Grande Dame of American ballet. Its scenario is a murder in a nightclub and the ensuing trial in a Chicago courtroom. Copland infused the score with the spirit of his jazz-influenced pieces, controversially distorting part of the National Anthem, and infiltrating music from some of his earlier works. In complete contrast, Appalachian Spring is his most famous work, a true American masterpiece founded on transfigured dance tunes and song melodies. This is volume two of the Complete Ballet series. Volume One is on 8559758.

Leonard Slatkin is Music Director of the Detroit Symphony Orchestra (DSO) and the Orchestre National de Lyon (ONL). He also maintains a rigorous schedule of guest conducting throughout the world and is active as a composer, author, and educator. Slatkin’s more than a hundred recordings have received seven Grammy awards and 64 nominations. His Naxos recordings include works by Saint-Saëns, Ravel, and Berlioz (with the ONL) and music by Copland, Rachmaninov, Borzova, McTee, and John Williams (with the DSO).

Leonard Slatkin and his Detroit Symphony Orchestra negotiate all this brightly and efficiently.

Slatkin’s new interpretation is vigorous and communicative, and the playing is distinguished too

A splendid disc that all Copland devotees should try to hear.

A worthy companion to Andrew Litton’s Colorado Copland; augurs well for the rest of this series.

immensely spirited...not only is the playing polished, lithe and dedicated, his unhurried conception again displays all the poetry, spontaneity and fresh-faced wonder one could desire (the magically soft closing pages are deeply touching). Even the slightly dry acoustic of Detroit's Orchestra Hall is aptly reminiscent of the theatre pit. An excellent coupling.