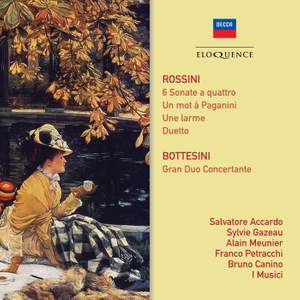 Rossini: Sonata a quattro No. 1 in G major

Rossini: Sonata a quattro No. 2 in A Major

Rossini: Sonata a quattro No. 3 in C major

Rossini: Sonata a quattro No. 4 in B flat major

Rossini: Sonata a quattro No. 5 in E flat

Rossini: Sonata a quattro No. 6 in D

Rossini: Duet for Cello and Double-Bass in D

In the summer of 1804 while on a summer holiday in the village of Conventello near Ravenna, Rossini, then aged twelve, composed his six Sonate a quattro for two violins, cello and double-bass. Many years later, the composer wrote on the front of the manuscript: ‘First violin, second violin, violoncello and contrabass parts for six horrendous sonatas composed by me at the country house (near Ravenna) of my friend and patron, Agostinio Triossi, at the most youthful age, having not even had a lesson in thorough-bass. They were all composed and copied in three days and performed in a doggish way by Triossi, contrabass; Morini (his cousin), first violin; the latter’s brother, violoncello; and the second violin by myself, who was, to tell the truth, the least doggish.’

Known also in orchestrated versions as the ‘String Sonatas’, they are rarer in these original versions. Together with musicians with whom he has worked closely – [names] – Salvatore Accardo recorded these in 1978 in Switzerland. They were issued the following year and, according to Tully Potter, who writes the notes for this release, ‘have acquired mythical status and are unlikely to be surpassed: the original two-LP set has been changing hands for three-figure sums but this is the first complete international CD reissue on Decca’. Three smaller Rossini works complete the disc which is then filled out by the more extensive Gran Duo Concertante for violin, double-bass and strings by Dragonetti’s successor as king of the double bassists, Giovanni Bottesini.

Although noted for his fearless and thrilling performances of music by Paganini for Deutsche Grammophon, Salvatore Accardo, who celebrates his 75th birthday in October 2016, also recorded extensively for Philips in the 1970s and 80s. His repertoire ranged from Baroque music through to 19th and 20th concertos, including the complete music for violin and orchestra by Bruch, and concertos by Mendelssohn and Sibelius.