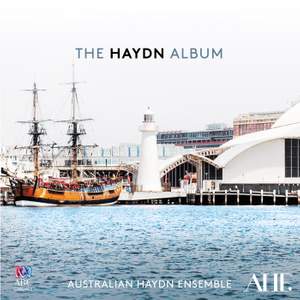 The 20-strong Australian period band are a polished, style-conscious ensemble, and both soloists have plenty to say about the music — Gramophone Magazine, December 2016

In their debut album, the Australian Haydn Ensemble (AHE) champions three of the finest works by the eighteenth-century composer Joseph Haydn. A super-star group of musicians with a host of international experience, the AHE is quickly establishing an international reputation for its vivacious performances, which are faithful to the sound-worlds that Haydn and his contemporaries would have originally known.

The Haydn Album features three of Haydn's best-loved compositions. The album opens with the Cello Concerto in C major, performed by ARIA-Award-winning cellist Daniel Yeadon. Written for Joseph Weigl, a young musician with whom Haydn performed, the concerto centres around an astonishingly beautiful cantabile - 'singing' - slow movement. Erin Helyard performs the Harpsichord Concerto in D major - most often heard on piano, but returned here to an instrument on which it would have been performed when it was first written. At the centre of the disc stands the Symphony 'Le matin' ('Morning'), with its stunning opening evocation of a sunrise.

Acclaimed by the Sydney Morning Herald for their 'ravishing sound', the Australian Haydn Ensemble have established themselves as 'one of Australia's finest period ensembles' (Limelight). Dedicated to playing the music of the classical era - at the heart of which stood Haydn - on instruments and in styles which the composers would have known, the Ensemble has regular concert series at the Sydney Opera House's Utzon Room and in Canberra, and recently announced The Honourable Dame Marie Bashir as their Patron.

The Haydn Album was recorded by acclaimed Tonmeister Virginia Read, and the playing of the Australian Haydn Ensemble represents the very latest research into performance practice at the time of the music's composition - including on-the-string bowing, and the choice of a harpsichord as the solo instrument in the concerto and within the orchestra as part of the symphony.

The 20-strong Australian period band are a polished, style-conscious ensemble, and both soloists have plenty to say about the music