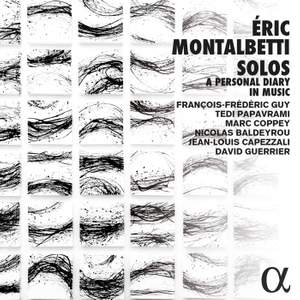 A personal diary in music

This album of ‘solos’ for various different instruments constitutes the composer’s ‘personal diary’ over some twenty-five years. Eric Montalbetti, who was artistic director of the Orchestre Philharmonique de Radio France from 1996 to 2014, long kept his music a secret, composing for himself, as if he were keeping a diary. Yet he had been composing since the age of eleven, while also learning the piano and the organ. He was taught by Paul Méfano and Michaël Levinas, and attended masterclasses with George Benjamin and Magnus Lindberg. In 1990 he received prizes from the Sacem and the Menuhin Foundation for his Violin Sonata. He seeks in music a language capable of expressing our most varied emotions: vital energy, interrogation, anxiety, mourning, rage, hope, prayer, love, gratitude. Trois études après Kandinsky for piano, Esprit tendre for oboe (a tribute to Helen and Elliott Carter), the Sonata for solo violin in four movements, a Suite for cello, five Formants for solo clarinet, and La Prière de l’Ange gardien for solo horn make up this programme, which is performed by some of the finest soloists on the current French scene.