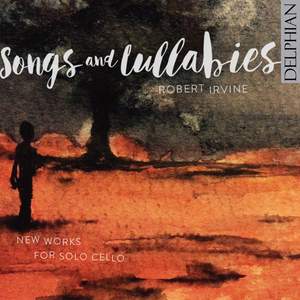 Roberts, R: Elegy for the Children of War

Wilde, D: Invocation and Waltz for Children in Need

Hellawell: A Frieze and a Litany

Irvine, B: Elegy (for Peter)

Inspired by the plight of disadvantaged and mistreated children around the world, Delphian artist Robert Irvine has commissioned 18 new pieces for solo cello. As a musician who works at the heart of the English and Scottish scenes, he is able to draw on an impressive roster of friends and colleagues that includes some of the UK’s leading composers. Each of them has contributed a short solo piece, drawing out the cello’s most lyrical aspects, while Irvine’s own startling alertness to the finest expressive nuance further enhances this unique recording project.

Over the course of his rich and varied career, Irvine has held principal positions with the Scottish Opera Orchestra, Academy of St Martin in the Fields and Britten Pears Orchestra, and was a founding member of the Brindisi String Quartet and Da Vinci Piano Trio. A regular Delphian artist, he has appeared on a disc of Dallapiccola’s chamber music (DCD34020); with Graeme McNaught on a much-lauded recording of Rachmaninov and Shostakovich cello sonatas (DCD34034); and – with Fali Pavri – a recording of Giles Swayne’s music for cello and piano (DCD34073). He is artistic director of Delphian’s contemporary music group Red Note Ensemble, which has a busy schedule of projects

throughout the UK and Europe. Irvine has broadcast frequently as soloist and chamber musician on BBC television and BBC Radio 3, and is a senior professor of cello and chamber music and Head of Cello Studies at the Royal Conservatoire of Scotland.

Irvine responds to each piece with the same sincerity, imagination and technical assurance; lovely playing, captured in warm, natural sound. A well-produced document of a very worthwhile project.