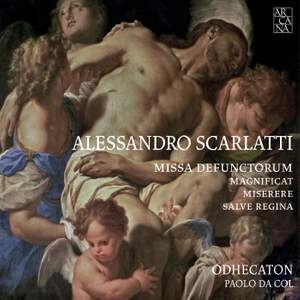 This recording is a discovery of Alessandro Scarlatti’s heretofore unknown sacred music, where Renaissance tradition meets Baroque sensibility for a unique and compelling recording. At the core of Odhecaton’s latest offering is the Missa defunctorum for four voices and basso continuo. It is in this magnificent score – recorded for the first time using the critical edition of Luca Della Libera – that primarily contrapuntal writing gives way to Scarlatti’s stylistic choices of great expressivity and rhetorical force, such as in the case of the astonishing Lacrimosa. The Miserere is also recorded for the first time. Written for nine voices for the Sistine Chapel, the score follows Allegri’s model only outwardly; Scarlatti, in fact, moves steadily away from it through his harmonic originality, formal richness, and expressivity. The Magnificat displays a unique synthesis of the Palestrinian model and the expressive language of the eighteenth century. In this score, Scarlatti exploits the great wealth and variety of the Marian text, particularly in the relationship between words and the emotional and descriptive spheres.