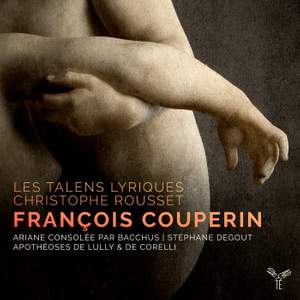 A newly discovered, charming cantata for baritone and continuo is lovingly rendered alongside stylish chamber works in praise of Lully and Corelli. — BBC Music Magazine, January 2017, 3 out of 5 stars More…

Couperin came from a dynasty of musicians very much in the public eye, starting with the beginning of the reign of Louis XIV. This dynasty would remain important after the death of Francois Couperin, known as Couperin le Grand ('the Great'). Chosen personally by the Sun King for the Chapelle Royale at Versailles, he was quickly forgotten after his death, being eclipsed by Rameau. However history would consider him the most accomplished expression of French genius in the 18th century.

Here, the cantata 'Ariane consolée par Bacchus' is unveiled and served by a dream cast led by Christophe Rousset. This first release on the Aparté label is the forerunner of a boxed set to celebrate the occasion of Couperin's 250th birthday.

A newly discovered, charming cantata for baritone and continuo is lovingly rendered alongside stylish chamber works in praise of Lully and Corelli.

The acoustic of the Eglise Saint-Pierre (Paris) allows us to enjoy both the warmth of [Degout's] voice and the detail of his fluent ornamentation....These works have been recorded many times but rarely so well. Rousset’s vision for his ensemble... is sublime, as too are his harpsichord realisations. This is a landmark recording to treasure.