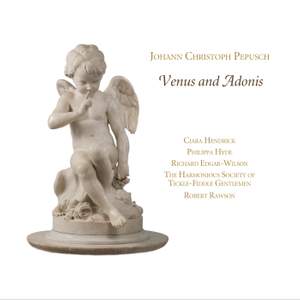 these are attractive performances from the three lead singers, particularly Ciara Hendrick, a passionate Venus, who sings with consistent assurance…Richard Edgar-Wilson is characterful in the... — BBC Music Magazine, May 2017, 3 out of 5 stars More…

Aria "How Pleasant Is Ranging the Fields"

Recitativo "But Soft! What Nymph Is This?"

Aria "With Her Alone I'll Live and Die"

Aria "Swain, Thy Foolish Sports Give Over"

Recitativo "In Vain of Love You Praise the Joy"

Recitativo "Alas! Alas! It Will Not Be!"

Recitativo "Hark! How the Cheerful Horn"

Aria "How Silly's the Heart of a Woman"

Recitativo "Such Scorn and Insult Can I Bear?"

Recitativo "Down to These Woods Descending"

Recitativo "But Soft! He Moves"

Aria "On Love What Greater Curse Can Fall"

Johann Christoph Pepusch’s English-language masque Venus and Adonis premiered at London’s Theatre Royal on 12 March 1715. Inspired by the operas of composers like Giovanni Battista Bononcini and Alessandro Scarlatti, it was the most substantial effort of the period to ‘reconcile Musick to the English Tongue.’

As part of the battle for supremacy amongst London’s theatres, Pepusch recruited ‘a select Band of the best Masters of Instrumental Musick’ and two of the city’s leading singers, the ‘Italian lady’ Margarita de L’Epine en travesti as Adonis and the contralto Jane Barbier as Venus.

The work bristles with Italian virtuosity and dynamism and unlike most English-language dramatic music at the time, Venus and Adonis makes ample use of dramatic recitative. A clear model for Handel’s later Acis and Galatea, this world-premiere recording of Pepusch’s wonderful masque reestablishes the work as a milestone in the history of English opera.

these are attractive performances from the three lead singers, particularly Ciara Hendrick, a passionate Venus, who sings with consistent assurance…Richard Edgar-Wilson is characterful in the low tenor part of Mars, and Philippa Hyde's Adonis brings a palpable humanity to the proceedings

Adonis’s jolly hunting song ‘How pleasant is ranging the fields’ is sung blithely by Philippa Hyde…the jealous Mars is sung nimbly by Richard Edgar-Wilson at the very bottom of his range; a quarrelsome duet for Venus and Mars is dramatically vivid…this excellent recording reveals that Pepusch is a significantly better composer than is normally assumed

It’s an immediately engaging and gloriously tuneful piece, employing the “arioso” form to keep a sense of pace in the drama, and taxing the soloists to the limit with some virtuoso coloratura arias. Recommended.