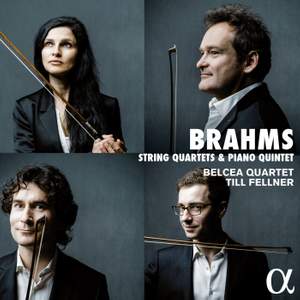 In 2003 the Belcea Quartet recorded a nerves-on-a-knife’s-edge account of Brahms’s C minor Quartet (Op 51 No 1) for EMI. Here, more than a decade on, their conception retains its essential ferocity,... — Gramophone Magazine, October 2016 More…

More than twelve years after its initial incursion into the music of Brahms, the Belcea Quartet now presents an eagerly awaited complete recording of his string quartets. A powerful style and a sense of musical architecture are the two qualities most often attributed to the Belcea, which is now one of the top international quartets. And those characteristics blossom to the full in Brahms. For the Piano Quintet, its members are joined by Till Fellner. This Austrian former student of Alfred Brendel is one of today’s most respected pianists, combining grace, rigour and musical intelligence. In September 2016 the Belcea Quartet will embark on a tour that will take it to the United States and most countries in Europe.

To coincide with the release of this new Brahms set, Alpha Classics will also reissue the complete Beethoven quartets (8 CD set, ALPHA262).

In 2003 the Belcea Quartet recorded a nerves-on-a-knife’s-edge account of Brahms’s C minor Quartet (Op 51 No 1) for EMI. Here, more than a decade on, their conception retains its essential ferocity, though without quite so much exhausting franticness...this new set offers sufficient insight and delight to be worthy of any devoted Brahmsian’s attention.

What a feast this is. The Belcea’s textures are so rich, you would think a larger force of strings was playing. And in the quintet’s glorious andante, their eloquence almost rivals that of the great Busch Quartet.

[The Brahms quartets] are outpourings of angst, ardency and resolute jubilation, all characteristics that the Belceas do brilliantly. This recording features intense and wonderful quartet playing: lucid and agitated, sleek and muscular, with Corina Belcea’s silvery-lean first violin sound balanced by the huge warmth at the centre of the ensemble from violist Kzystof Chorzelski.