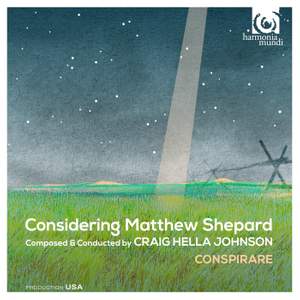 The sincerity of the composer’s response to Shepard’s life and the performers’ commitment is never in doubt. The choral singing (soloists are drawn from their rank) is excellent, committed and... — Choir & Organ, January 2017, 4 out of 5 stars More…

3. We Tell Each Other Stories

12. Fire of the Ancient Heart

David talks to the composer about his fascinating and complex new choral work.

Craig Hella Johnson leads Conspirare in this world premiere recording of his Passion 'Considering Matthew Shepard', his musical response to the tragic death of a young gay man who was beaten and subsequently died, and who has become an American icon and a symbol for hope and empowerment. This major new work for chorus, soloists and chamber ensemble sets a rich variety of texts by Lesléa Newman, Michael Dennis Browne, the composer himself and many others, leading us from anguish to understanding. Many Conspirare singers are featured as soloists, and the vocal group is joined by a small ensemble of strings, piano (Craig Hella Johnson), guitar, clarinet, and percussion.

The sincerity of the composer’s response to Shepard’s life and the performers’ commitment is never in doubt. The choral singing (soloists are drawn from their rank) is excellent, committed and as engaging as one might expect.

I’ve long admired Johnson’s work with Conspirare, both in established repertoire and relatively new work, and they give their all to this piece … their diction is impeccable throughout … Harmonia Mundi have also done themselves proud by deciding that the work was worthy of a recording. I agree with them … I found it musically, artistically and spiritually very successful, and I recommend it

Conspirare are absolutely wonderful in this, the quality of the voices, the solos … it’s a superb choir and they have a chameleon quality vocally, they have to inhabit so many different styles from contemporary choral through gospel, through jazz, through funk, and they’re singing as very credible soloists as well as this beautifully blended ensemble