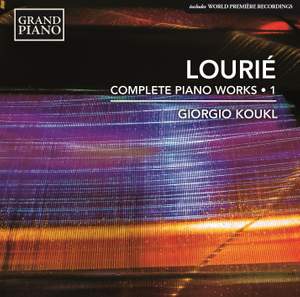 The first volume devoted to Arthur Vincent Lourié’s piano music traces his journey from the Debussian Impressionism of his youthful Cinq Préludes fragile, Op.1 through absorption of Scriabin’s chromaticism in the eerie Masques (Tentations) of 1913 to the near-Cubism of Formes en l’air. Though lauded – or derided – as a pioneering Futurist, his post-Revolutionary writing in France embraced a nostalgic Neo-Classicism represented by the blithe Petite Suite en Fa.

Giorgio Koukl is a Czech pianist/harpsichordist and composer. He studied in Prague at the state music school and conservatory. He continued his studies at both the conservatories of Zurich and Milan, where he took part in the masterclasses of Nikita Magalov, Jacques Février, and Stanislaus Neuhaus, and with Rudolf Firkušný, friend and advocate of Czech composer Bohuslav Martinů. It was through Firkušný that Koukl first encountered Martinů’s music. He is now considered one of the world’s leading interpreters of Martinů’s piano music, having recorded that composer’s complete solo piano music, together with four discs of Martinů’s vocal music and two discs of his piano concertos. As a logical continuation of this work, Koukl has now recorded the complete solo piano works of Arthur Lourié, an important member of the “silver age” group of Russian composers, and of Vítězslava Kaprálová.