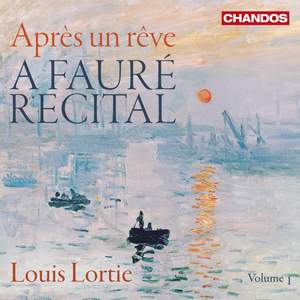 You are left marvelling at the intricate beauty of Faure’s unique style - which is, hopefully, any great pianist’s ultimate aim. — BBC Music Magazine, December 2016, More…

This is the first volume in Louis Lortie’s new series devoted to the music of Gabriel Fauré.

As he states in the booklet notes, ‘this album purposely travels through Fauré's various creative periods, from easily appealing early pieces such as the Pavane and the mélodie “Après un rêve” through to the late and unjustly neglected Préludes, a masterpiece of condensed harmonic and melodic audacity.’

Released after four volumes in an ongoing Chopin series – ‘an exceptionally high order of playing’ (BBC Music) – this album, besides the masterful late Op. 103 Préludes, unsurprisingly features in Lortie’s words ‘the romantic, post-Chopinesque genres of the Nocturnes and Barcarolles along with pathbreaking small forms of neoclassical aesthetics such as the suite from Pelléas et Mélisande, here in a solo piano version highlighting the ambiguity of a canvas of pianistic and orchestral colourings that would be a major influence on Fauré’s successors’.

You are left marvelling at the intricate beauty of Faure’s unique style - which is, hopefully, any great pianist’s ultimate aim.

This lovingly conceived programme begins with Lortie’s own transcription of the Pavane, capturing the delicate colours and wistful melancholy of the orchestral original…the seldom-encountered Nine Preludes rounding out the disc are of special interest…my favourite is No 3, where ambiguity gives way to ecstatic outpouring, here rendered with the utmost refinement of touch

[Lortie] understands the type of discretion needed to make this music sing, he knows the veiled colours it requires – to which end he plays a Fazioli piano of immense tonal beauty – and he has the sort of technique to project Fauré’s signature elusiveness...Above all, Lortie identifies fully with Fauré’s chromaticism and understands how he uses it to create space and light.