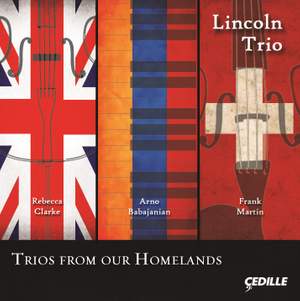 Trios from Our Homelands

Three cracking works in performances that are as good as any. — MusicWeb International, 5th January 2017 More…

A one-of-a-kind album, Trios From Our Homelands offers stellar performances of substantial works that many listeners will be discovering for the first time. The 1922 Piano Trio by England’s Rebecca Clarke brims with attractive melodies presented with virtuosity and musical ingenuity. Armenia’s Arno Babajanian, whom Mstislav Rostropovich called “a brilliant composer,” is represented by his passionate Piano Trio in F sharp minor from 1952. Swiss composer Frank Martin wrote his tuneful Trio on Popular Irish Melodies, the best-known work on the album, in 1925.

The Lincoln Trio made its full-length Cedille album debut with Notable Women, featuring works by Lera Auerbach, Stacy Garrop, Jennifer Higdon, Laura Elise Schwendinger, Augusta Read Thomas, and Joan Tower. Gramophone said, “The performances by the Lincoln Trio are models of vibrancy and control. The notables on this recording could hardly have better champions.” The Strad praised the ensemble’s “interpretative flair” and “supreme clarity of expression.” Cedille’s Turina: Chamber Music for Strings and Piano is an album on which “sensitive and polished readings by the Lincoln Trio and assisting musicians reveal what is best about this neglected repertory” (Chicago Tribune). The group also performed on the Grammy-nominated Naxos recording of James Whitbourn’s Annelies.

Three cracking works in performances that are as good as any.

The best item is Clarke’s 1921 Trio, with its three thematically linked movements: writing of gusto and finesse; English-accented late Romanticism pushing into the modern.

The Lincoln Trio give shapely and impassioned performances of these three unfamiliar 20th-century chamber works...Martin’s Trio on Popular Irish Melodies is alive with rhythmically catchy, jazzy writing. Most elusive is the trio by Rebecca Clarke, a mix of dissonance and passion that seems to exist in a musical world of its own.

this is among the most irresistible chamber releases in aeons…music of alarming intensity, violence and melodic richness, Clarke’s bold harmonies the icing on the compositional cake…a big-boned, accessible bear hug of a piece, the tunes come thick and fast [in Babajanian’s Piano Trio]….sensationally played too, the balance impeccable…[Martin’s Trio is] funny, life-enhancing and frequently beautiful, given a barn-storming performance