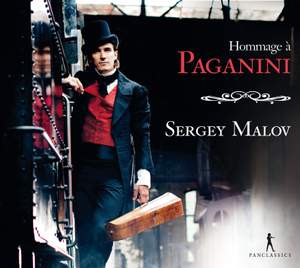 Gabrielli: Ricercare for Solo Cello No. 3

Gabrielli: Ricercare for Solo Cello No. 6

Schnittke: A Paganini for violin solo

The violin virtuoso Sergey Malov is one of the quickly rising young stars of today's music scene, with a career triggered by his awards in important international competitions (Heifetz 2008, Mozart 2010, Michael Hill 2011 or Tokyo 2010, the latter on the viola). Unlike most of his colleagues, he does not limit his activity to the modern violin, but is also committed to Baroque performance practice, and to playing both the viola and the violoncello da spalla, an instrument played on the shoulder.

On his CD 'Hommage à Paganini', Malov presents highly virtuosic solo works for his four instruments, in a recital which creates a strong emotional link to the 19th-century's 'devil's violinist'.