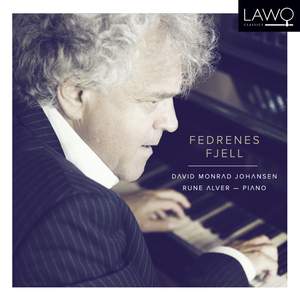 Composer David Monrad Johansen was born in Vefsn in Nordland County, Norway in 1888. While Monrad Johansen sought out many influences abroad trying to find his unique tonal language, he is, at the same time, regarded as a standard-bearer of the nationally-oriented musical style that developed in the interim between the two world wars. His interest in traditional music lay not primarily at the melodic level. Rather he regarded traditional music and traditional poetry as vigorous expressions of a genuine indigenous national character or national temperament that could be carried on and refined through music.

Traditional music is often closely associated with nature and landscapes. The compositions on this album are also an expression of Monrad Johansen’s close association with the Nordland of his childhood and with Gudbrandsdalen. Monrad Johansen’s landscapes resonate with his strong emotional ties to Norwegian nature and culture and a musical style shaped by international currents.