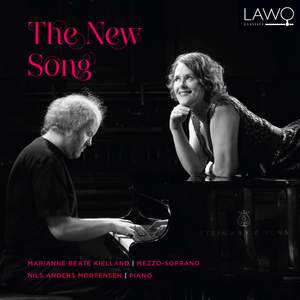 Hellstenius: ...as the last blow falls…

We know many of them — the German Lied, the French chanson, the Scandinavian song — works for voice and piano. Countless such musical pieces have been written throughout history, mainly from Mozart’s time on. But after a couple of hundred years, this form of composition fell “out of fashion”, and composers often used other ways to accompany singers.

How do we think of classical song today? I challenged three composers to each write his “Lied”, a piece of music for voice and piano, and received three remarkably different results. Two hundred years ago, the format was predictable; today, boundaries have dissolved, and the composer turns out whatever the heart desires. What these composers write about their own works appears later on.

In addition, we wished to include five wonderfully distinctive songs of Edvard Hagerup Bull — a composer of our own time, but one who was and remained controversial, and, as such, was essentially deprived of recognition and fame in Norway. Edvard Hagerup Bull was a grandnephew of Edvard Grieg, he studied with Messiaen and Milhaud, among others, and he lived a large part of his life in Paris.

Many are familiar with the short aphoristic poems of Piet Hein known as “grooks” — artful, thought-provoking texts with their unconventional way of looking at life. Coupled with Hagerup Bull’s playful, humoristic music, they become musical gems deserving of attention and performance. We are pleased to have these songs on the recording! To be on the safe side, I wish to point out that the “grooks” are written in Danish, but I have chosen to sing the texts with Norwegian pronunciation.