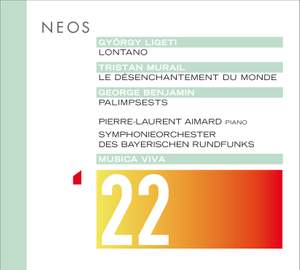 This is special. Three utterly captivating, ear-tickling pieces by composers from successive generations in superlative performances…the centrepiece of the disc is the world premiere performance... — BBC Music Magazine, Christmas 2016, More…

When the first concert of the series founded by the composer Karl Amadeus Hartmann (later designated as musica viva) took place at Munich's Prince Regent's Theatre on 7 October 1945, it marked the birth of an important new cultural event in post-war Germany.

Up to the present day, this oldest concert series for New Music still brings together the world's most important artists - conductors and interpreters alike - in the field of new and the newest music, also continuing to set new standards for the interpretation of new classical music with the outstanding Bavarian Radio Symphony Orchestra.

The SACD presented here is a good example of this: Ligeti's Lontano - a classic! Murail's Piano Concerto completed in 2012 - interpreted by Pierre-Laurent Aimard - and Benjamin's Palimpsests of 2002. All three works conducted by George Benjamin himself - one can't do any better than that!

Benjamin leads a superlative performance [of Lontano], one surprisingly visceral for a piece about distance…the Bavarian Radio Symphony Orchestra supply more immediacy, with a richness that they might also deploy in, say, Strauss…Benjamin’s own Palimpsests come off well, too, and again the Bavarians’ playing is special…Aimard is as strong an advocate as always [in Le désenchantement du monde], and Murail devotees should not hesitate

Benjamin’s performance of Ligeti’s Lontano, a 20th-century classic, is exceptional for its transparency and its wonderfully controlled sense of mystery...Like all the best music, [Benjamin's] Palimpsests makes up its own structural rules as it goes along, defining its aims and achieving them with total success.