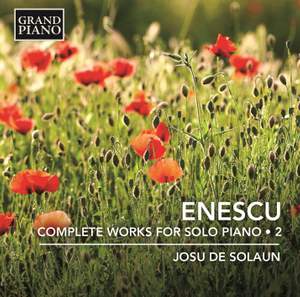 The four works in this second of three volumes devoted to Enescu’s piano music range over a period of more than 30 years. The earliest is the joyful, ebullient Suite ‘Des cloches sonores’, Op.10 which covers a wide expressive range including use of the melancholy Romanian song, the doina. The Piano Sonata No.3, Op.24 is a mercurial, puckish work, both spirited and contemplative, and the Pièce sur le nom de Fauré is a charming souvenir from one composer to another.

De Solaun never makes heavy weather of Enescu’s demanding writing, but lets expression lead at all times, no matter how intense the virtuosity. There’s a bouncy vitality to his playing, a warm and intimate approach to phrasing and beautifully mellow tone quality.