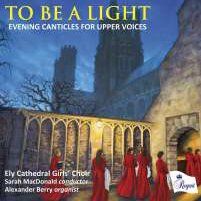 To Be A Light

MacDonald, S: Service in A flat

Moore, P: Magnificat and Nunc dimittis in A (for St Mary’s, Warwick)

Rose, B: Service in E

The Magnificat and Nunc dimittis (affectionately known as the “Mag and Nunc”) are said and sung daily throughout the world during services in most Christian denominations. In the Anglican tradition, they are specifically paired in the service of Evening Prayer.

Throughout the centuries, the vast majority of setting of these canticles were scored either for men’s voices or for full choir. In the late 19th and early 20th centuries, as the Anglican choral revival in England flourished, weekday services in parishes and schools were often sung only by boy choristers. Since then the introduction of girls’ choirs into British cathedrals and parish churches, and the absence of Layclerkes from some services, has resulted in an increased demand to set services for upper voices and organ.

This CD features settings from the 19th and 20th century stalwarts Harris, Howells, and Rose, as well as newer settings written within the last 20 years with several first recordings.