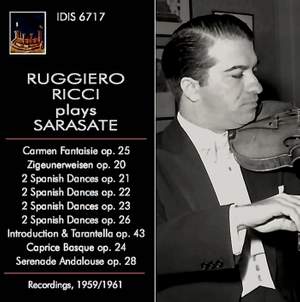 Pablo de Sarasate was a successful Spanish composer and virtuosic violinist. His output for violin is indicative that this composer truly understood the nature and nuances of the instrument. + Many of his compositions are still a part of the standard repertoire, including the ones presented on this album. + Perhaps one of the greatest violinists of the twentieth century, Ruggeriero Ricci is best known as the first violinist to record Paganini’s 24 Carprices in their original form. These recordings were made from 1959-1961.