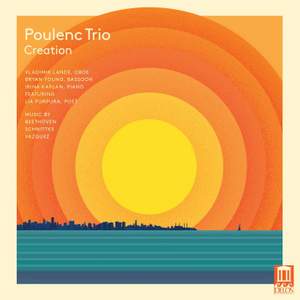 Schnittke: Suite in the Old Style

The ever-impressive Poulenc Trio is a first-rate chamber ensemble comprised of distinguished oboe, bassoon, and piano virtuosos. In this – the group’s debut recording for Delos – we are treated to a fascinating and beautifully played program centered on works by Russian master Alfred Schnittke alongside music both old and new by Beethoven and Spain’s Octavio Vasquez.

The two Schnittke pieces are actually different versions of the same arresting work, Suite in the Old Style, written after this erstwhile “bad boy” of Soviet-era music had abandoned his radically serial style in favor of a more accessible approach. The first version pairs each of its five movements with a poem by award-winning poet Lia Purpura (from her collection It Shouldn’t Have Been Beautiful ), while the second omits the poetry.

The remaining works are Beethoven’s charming “Gassenhauer” Trio and the Triptych for Oboe, Bassoon, and Piano – a captivating piece that Vasquez composed specifically for the Poulenc Trio, which is committed to commissioning, performing, and recording new works from living composers.