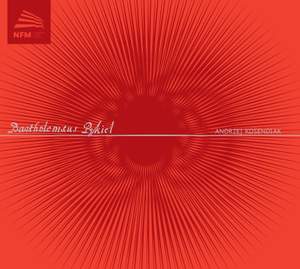 Bartłomiej Pękiel was one of the finest old-Polish composers of the Baroque era. Appraisals of Pękiel’s oeuvre above all underline two characteristics of his style discernible both in his vocal-instrumental concertato works and in pieces written in an a cappella polyphonic style. The first is his masterly exploitation of polyphonic techniques, an achievement that for some time has been remarked upon by musicologists and performing musicians. (...) The second important characteristic is the composer’s fluency in exploiting the Baroque language’s musical rhetorical figures serving to underline the essence of spoken texts. In the light of recent research into methods of applying this art by old-Polish composers, Pękiel comes across as the most distinguished, capable of exploiting a wealth of means in the tonal interpretation of words and enhancing their textual content. (...)

The works recorded on this CD constitute a ‘showcase’ for Bartłomiej Pękiel’s strand of oeuvre described in his day as stile antico or prima practica. They also prove that within a style associated with tradition (also local – in this case related to Wawel) it is possible to create similar yet distinct works like the lesser known Missa secunda and the famous Missa Pulcherrima or forms of a smaller scale – like the expressively effective Assumpta est or the not only structurally ‘linear’ Sub tuum praesidium motets.