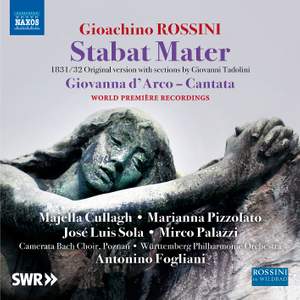 Rossini’s Stabat Mater is one of the staples of the sacred music repertoire but had a complicated history. He wrote it for performance in Madrid but, running short of time, enlisted the help of his friend Giovanni Tadolini. Rossini completed six pieces, Tadolini seven. Tadolini’s pieces now only exist as piano reductions but conductor Antonino Fogliani has orchestrated them to allow listeners to hear the original work for the first time since 1833. Marco Taralli’s 2009 orchestration of Giovanna d’Arco (Joan of Arc), a cantata for solo voice, is also heard on this first recording.

Antonino Fogliani made his celebrated début at the Pesaro Rossini Opera Festival in 2001 with Rossini’s Il viaggio a Reims, followed by various engagements in Pesaro and in leading opera houses, including La Fenice in Venice, the Teatro dell’Opera, Rome, the San Carlo in Naples and the Opéra Comique in Paris, as well as the Bergamo Donizetti Festival. He made his début at Rossini in Wildbad in 2004, leading to a series of further performances and recordings. He was appointed musical director of Rossini in Wildbad in 2011.

The original version of Rossini’s Stabat Mater: an interesting curiosity

Operatically-infused performances of sacred music with less connection to Rossini than might at first sight appear.