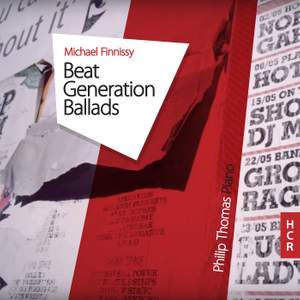 Both have titles provoking awareness that there’s more to music than crochets and quavers...First Political Agenda is a quasi-sonata whose first movement, “Wrong place. Wrong time”, is an explosion... — Sunday Times, 12th June 2016 More…

II. Is There Any Future for New Music?

III. You Know What Kind of Sense Mrs. Thatcher Made.

I. Lost but Not Lost

II. Naked Original Skin Beneath Our Dreams & Robes of Thought

"Listeners who have been following closely the music and development of Michael Finnissy over the past half-century, or who are familiar with his wide-ranging and prolific output, will be accustomed to being wrong-footed when hearing a new work. Finnissy is a master of counteracting supposed stylistic traits, continually enlarging his gamut of references, forms and notational practices. The two works presented here will likely prove no exception. Yet they also serve as ideal introductions to the composer's vision, methods and language. Typically evocative (and provocative) titles combine with a diverse set of musical references, from Bach to jazz, Irish republican song to Webern. Though it is Beethoven that looms most large..."

Both have titles provoking awareness that there’s more to music than crochets and quavers...First Political Agenda is a quasi-sonata whose first movement, “Wrong place. Wrong time”, is an explosion of modernismus almost parodic in its black disjunctiveness.

It’s music that can be overwhelmingly complex and forbidding, tenderly sentimental, or frankly autobiographical. And it is strewn with allusions and references to a range of other periods and styles. Those characteristics and qualities are on display in the two large-scale works on Philip Thomas’s thoughtful and superbly played disc.