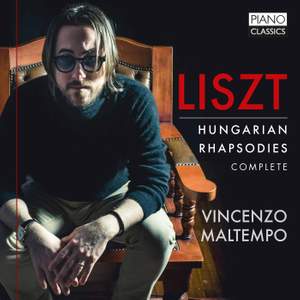 One of the more striking aspects of Maltempo’s approach to these works is his inerrant sense of timing. There’s no rush to arrival: every scintillating detail is savoured at leisure, without... — Gramophone Magazine, February 2017 More…

No. 9 in E-Flat Major, "Pesther Carneval"

This 2 CD set contains a new recording of the complete 19 Hungarian Rhapsodies by Liszt, an immense achievement of Vincenzo Maltempo, who has established himself as one of the foremost pianists of his generation.

Liszt wrote his Rhapsodies at the peak of his powers as a travelling piano virtuoso. They form his homage to the country of his birth, Hungary, using (quasi) folk melodies in the Hungarian mode. Usually constructed in binary form, a slow melancholy introduction and a fast and furious folk dance finale, they are vehicles of true sentiment, deep passion and blazing virtuosity, a part of the standard concert repertoire of many pianists.

Vincenzo Maltempo has already made his name with his spectacular recordings of the piano music by Alkan for Piano Classics: “exhilarating, a revelation! “ (Guardian, selected among the 10 best CD’s of 2012), “his playing flashes with summer lightning” (Gramophone), “Maltempo puts his phenomenal technique at the service of his poetic vision”(Piano News), “with this passionate performance Maltempo confirms his place in the restricted circle of Alkan’s best performers” (5 star, Diapason) and many more.

One of the more striking aspects of Maltempo’s approach to these works is his inerrant sense of timing. There’s no rush to arrival: every scintillating detail is savoured at leisure, without a trace of decadent indulgence...This well-recorded set, thoughtfully and reverently conceived, captures the magic Liszt invested in these richly evocative pieces, unique in the 19th-century literature.