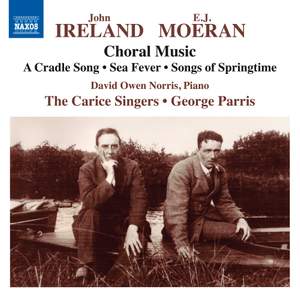 A very fine disc of music that is richly rewarding for both listener and choir. — MusicWeb International, October 2016 More…

Ireland: When May is in his prime

Ireland: Fain would I change that note

Ireland: These Things Shall be

Ireland: In Praise of Neptune

No. 1. Under the Greenwood Tree

No. 3. Spring, the Sweet Spring

I. Madrigal: Phyllida and Corydon

III. Pastoral: On a hill there grows a flower

V. Ballet: Said I that Amaryllis

VI. Canzonet: The treasure of my heart

VII. Air: While she lies sleeping

Renowned for his outstanding piano miniatures and solo songs, John Ireland is little known these days as a composer of partsongs. His deep understanding of choral forces brings a unique polish and artistry to the genre, his early style reflecting a deference to his masters Parry and Stanford, and deeply moving post-war masterpieces such as Twilight Night exploiting a more acerbic harmonic vocabulary. E.J. Moeran’s inclination towards introspective melancholy blends with his knowledge of Elizabethan madrigal and renaissance dance, resulting in true gems on themes of love such as While she lies sleeping.

The Carice Singers are an ensemble comprised of some of the United Kingdom’s best young professional singers, noted for their “freshness of tone” and “careful musicality” (Gramophone). Named after the daughter of Sir Edward Elgar, the choir aims to bring an imaginative approach to choral music of the Romantic period and beyond, frequently drawing upon the latest academic research to produce original and insightful programmes. Among The Carice Singers’ ongoing projects is a mini-series of recordings for Naxos featuring choral music by lesser-known British composers, including Warlock, E.J. Moeran and Bax.

A very fine disc of music that is richly rewarding for both listener and choir.

The youthful Carice Singers perform these part songs with vigorous attention to detail and, a few tiny slips of intonation aside, beautifully blended tone. Hugo Popplewell is the wistful soloist in Ireland’s Sea Fever. This is music of heat haze, hey-nonny wistfulness: ideal high-summer listening