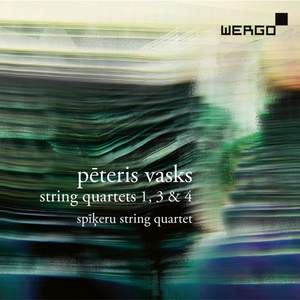 “I have always dreamed that my music would be heard in the places where unhappy people are gathered – in hospitals, prisons, overcrowded trams and buses... consoling and questioning.” It is Pēteris Vasks. His main mission is a panegyric of love.

There are characteristic symbols in Vasks’ music: birdsongs associated with ultimate freedom; elements of Latvian folk music as reminders of Latvian identity; toccata-like passages expressing an evil and brutal force, and aleatoric episodes picturing the scenes full of despair and chaos. Besides the all-embracing humanism, the destiny and history of Vasks’ homeland Latvia have always been present in his music. Born in 1946 at Aizpute, a town situated in Western Latvia, Vasks has spent most of his life under the regime of Soviet occupation, witnessing both the suppression of the Latvian language and deliberate russification of the Latvian nation.

Deeply felt pain of his oppressed nation, its endangered identity and the portrayal of totalitarianism at its most brutal became the dramatic vein of Vasks’ music.

The present recording of the String Quartets Nos. 1, 3 and 4 completes the string quartet oeuvre of Pēteris Vasks already recorded by the Wergo label. All string quartets were released on the occasion of the Latvian composer’s 70th birthday. Each of the five string quartets was composed at a different time, but they all cover almost thirty years of his creative experience and clearly illustrate the basic principles of Vasks’ musical language.