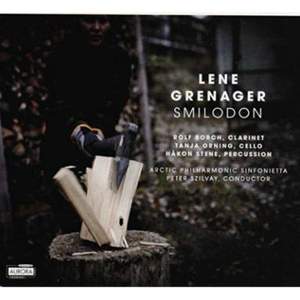 The opening of ‘Smilodon’ (the name of a cat with enormous fangs and weighing 200 kilos from America during the last Ice Age) is closer to porous thought than heavy-handed action. From an undefined place deep down in the bass clarinet’s darkness rises a smoke signal that is reinforced in percussion and high-pitched winds. It feels like the music could explode at any time.

Both the dark and the sturdy, the lithe and the explosive may perhaps be traced back to Lene Grenager’s own instrument and her career as a performer. As a cellist she is specialized in improvised music and works mainly in the quartets SPUNK and Lemur, and in a duo with singer Sofia Jernberg. The cello is never far away when she is composing.

In ‘The Operation’ (2012), Grenager and percussionist Håkon Stene place the cello on the operating table. Together they approach the instrument systematically as a passive, percussive source of sound. The cello is stripped of tradition and convention and is treated as a primitive object, a wooden box with strings, by a musician with long experience, without any expressive or motile memory connected to the instrument. The piece is part of a research project in which Stene critically investigates the potentially unlimited number of instruments available to him as a percussionist as well as relationships they create between body and instrument.

The Cello Concerto from 2006 was written at the same period as the music on the CD ‘Slåtter, slag og slark’, where Grenager investigates her own instrument both as soloist and composer. Much of this folk music was played for dancing and its organic character often comes from dance steps and rhythms that are metrically uneven. With Grenager both the distorted rhythms and the folkdance’s energy survive to be translated into a sinfonietta, which also has a soprano on equal footing with the other instruments. The cello part begins in the inflections of folk music, but with a sound that immediately bursts out from notes and melodies, and over into a wide vocabulary of sounds of friction between instrument, bow and body.