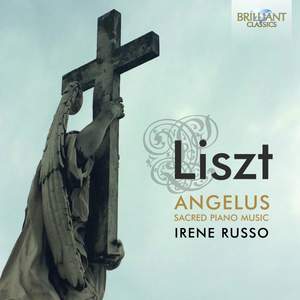 Russo is fully equal to the task. She possesses the courage, pianistic finesse, myriad sensitivities and, above all, the requisite imagination to make Via Crucis both a gripping drama and a cathartic... — Gramophone Magazine, September 2016 More…

Best-selling recording artist and prolific recitalist Irene Russo showcases a rare selection of recordings displaying the deeply spiritual dimension to Liszt’s music. Featuring Liszt’s masterful transcriptions of his own orchestral and choral works plus original works for piano, Russo brings her formidable interpretative skills to these powerful and varied works.

Often written during times of spiritual and emotional upheaval for the composer, collections such as Harmonies poétiques et religieuses and Deux Légendes encapsulate Liszt’s uniquely turbulent brand of romanticism, spliced with the sincere religiosity that inspired the works. The austere lyricism of Miserere alongside the glistening arpeggio chatter of La Prédication aux oiseaux capture perfectly the romantic ideals ascribed to Liszt’s work: of transcending the material world through musical expression whilst venerating the places of worship and displays of nature which so inspired him. Other works such as Totentanz (‘Dance of the Dead’) are fraught with the composer’s obsessions with realising the divine and the diabolical in his music, a theme so pertinent to his experience as an artist and as a man. Full of daring stylistic innovations and macabre variations on the original Gregorian theme, Totentanz also belies Liszt’s personal ambiguities: dazzling, internationally renowned showman (and somewhat of a ladies’ man) and devout Catholic, these characteristics are beautifully summarised in his own words: ‘Mournful and yet grand is the destiny of the artist…’

Russo is fully equal to the task. She possesses the courage, pianistic finesse, myriad sensitivities and, above all, the requisite imagination to make Via Crucis both a gripping drama and a cathartic spiritual journey…Russo’s richly atmospheric interpretations represent Liszt-playing of a high order. This is something you shouldn’t miss