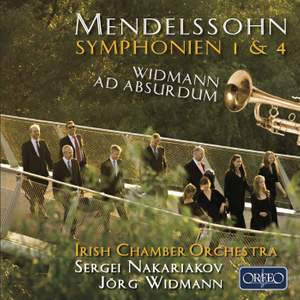 There’s no mistaking the inventiveness of many of the textures [in the Widmann], with the orchestra at times matching the soloist in technical address, and certainly the fade-out ending is beautifully... — BBC Music Magazine, September 2016, 3 out of 5 stars More…

ORFEO is delighted to begin a new collaboration with the Irish Chamber Orchestra and its Artistic Director Jörg Widmann to record the symphonies of Felix Mendelssohn, a great, yet still underestimated Romantic composer. The multi-talented Jörg Widmann comes to the project not just as an instrumentalist and conductor but as a “composer colleague” of Mendelssohn, making this project all the more attractive. Mendelssohn was a Wunderkind who gained prominence with his compositions at an early age. The symphony he numbered his “First”, in C minor, was not just the work of a 15-year-old boy, but already his thirteenth work in the genre (if one counts his twelve string symphonies too). His background in the large-scale chamber music of his string symphonies perhaps makes it all the more pertinent to approach his oeuvre with a chamber orchestra, not with the usual, heavy, late-Romantic orchestral apparatus.

This first edition in the series features a bridging work that is not just the obligatory solo concerto such as one might expect in a concert programme, but a work in a genre popular with Romantic composers such as Schumann and Weber, namely a Konzertstück or “concert piece”. Furthermore, ORFEO is delighted to be able to present not just a first-class soloist here, but also a work written especially for him by the Artistic Director of the project, namely Jörg Widmann’s ad absurdam. It takes a masterly instrumentalist to divine and explore the truly transcendental possibilities and musical intelligence that this music presents. Nakariakov’s mastery of circular breathing is employed here in particular, and typical of Jörg Widmann’s alert creative spirit that he makes use of these unique opportunities with a dash of Romantic irony, heightening them to the point of absurdity – as the title suggests.

There’s no mistaking the inventiveness of many of the textures [in the Widmann], with the orchestra at times matching the soloist in technical address, and certainly the fade-out ending is beautifully managed