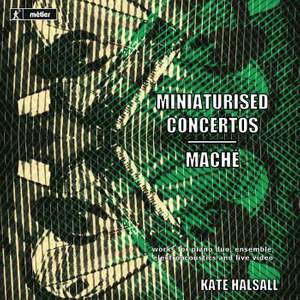 Poppy: Swimming with the Stone Book

Riley, Colin: Hanging in the Balance

This album is the culmination of a project begun by pianist Kate Halsall to explore ways of transforming the traditional piano concerto; works were developed centered around two pianos with varied chamber and electro-acoustical accompaniment, some of which are genuinely ‘fusion’ works incorporating jazz and rock instruments. Extended techniques, pitched silences and film also play a part. The album concept includes an audiovisual work not on the CD but available to stream, or to buy for a small extra cost. The second disc is more experimental and consists of four “Maché” pieces, made up of building blocks contributed by a number of composers, some specially written and some being extracts or arrangements of full length works. They include improvised and notated material, spoken word and many technical effects, producing a fascinating set of sound collages based around the two-piano core.

The album involves many composers and performers from the exciting new-music scene in England all of whom are developing reputations for excellence and innovation. They include many from experimental Rock and Jazz as well as classical: pianists are Fumiko Miyachi, Martin Butler, Marjolaine Charbin and Rachael Ueckermann, with Lucy Shaw (upright bass), Ruth Goller (bass guitar), Joel Bell (electric guitar), and Ensemble Dark Inventions (and more!).