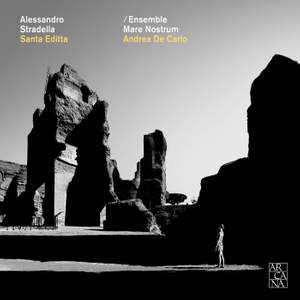 A vivid performance – a foil for the diverse cast of musical characters around her. The standout is Aspromante. This young soprano…is all sparking ease and delight, blending beautifully with... — Gramophone Magazine, July 2016 More…

With this third installment of the Stradella Project, Andrea De Carlo and Ensemble Mare Nostrum continue the exploration of the oratorio output, following the recent rediscovery of San Giovanni Crisostomo.

An historical figure from the 10th century, Edith of Wilton was an English nun of noble birth, and legend has it that she refused the opportunity of taking the throne, causing the aversion of a faction of nobles.

The title role of Stradella’s oratorio, Edith is disputed between various allegorical characters: on the one hand Humiltà, pushing her to a chaste monastic life, on the other hand the mundane figures of Grandezza, Bellezza, Nobiltà and Senso, all inviting her to become Queen and enjoy the pleasures of life. In the end, Edith will ignore the strong arguments submitted by the latter in favour of the advice from an arrogant Humiltà, a sort of alter ego of the Queen who was not to be.

The Argentine soprano Verónica Cangemi offers us an emotional portrayal of the title role, surrounded by a distinguished cast, including Francesca Aspromonte as Nobility, Gabriella Martellacci as Greatness, Fernando Guimaraes as Beauty, Sergio Foresti as Sensuality, and Claudia Di Carlo as Humility.

As in previous installments, recording was made within the framework of the Alessandro Stradella International Festival in Nepi, the composer’s birthplace.

A vivid performance – a foil for the diverse cast of musical characters around her. The standout is Aspromante. This young soprano…is all sparking ease and delight, blending beautifully with Cangemi in their ‘Bella luce’ duet…an attractive hour of music that should win some new fans for the Stradella Project