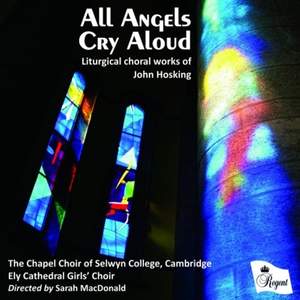 An inspirational collection of the liturgical choral music of John Hosking.

This disc of choral works by a new voice brings an exciting and dynamic approach to writing for the church. This is melodious and memorable music, and the pieces range from exquisite miniatures, such as A Royal Blessing, written for the birth of Prince George of Cambridge in 2013, to the massive setting of the Te Deum. Also included is Hosking’s short Requiem setting.

John Hosking is currently Assistant Director of Music at St Asaph Cathedral in North Wales. A prize-winning student at the Royal College of Music, John continued his studies with the late Nicholas Danby and Margaret Philips. He was appointed Organ Scholar of Westminster Abbey in 1996 and is the only person to have ever held this post for three years. His recent move into the world of composition has been met with much enthusiasm from performers and listeners alike. For him, composition is the result of a source of inspiration – be it a text, a life event, a choir or individual performer.

John Hosking is particularly known for his powerful and commanding improvisations, and much of his inspiration has come from three great organists, Martin Baker, David Briggs and the French master, Pierre Cochereau. The style used in his improvisations permeates the organ accompaniments in many of the items on this disc, spilling over to influence the vocal lines.

This is the eighth CD that Regent has made with the Chapel Choir of Selwyn College, Cambridge, and the third where they have joined forces with Ely Cathedral Girls’ Choir, under the direction of Sarah MacDonald.

All of the works are receiving their first recording.