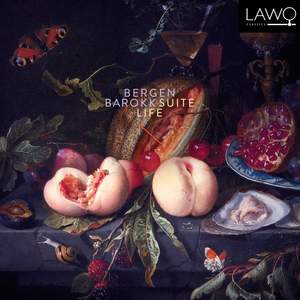 Philidor, A D: Pièces in G Major and G Minor

Marais, M: Pièces in A Major and A Minor

Chédeville, N: Pièces in A Major and A Minor: Pastorale (Chédeville)

Jacques-Martin Hotteterre le Romain: Pièces in A Major and A Minor: Musette (Hotteterre)

Couperin, F: Pièces in A Major and A Minor: Muséte de Choisi (Couperin)

Philidor, A D: Pièces in A Major and A Minor: Chaconne (Philidor)

Philidor, A D: Pièces in D Major and D Minor

Bergen Barokk’s second release on the LAWO Classics label, “Suite Life”, takes us to the French court during the reign of the Sun King.

Elegant conversation, music, painting, fencing and dance — the arts performed with a certain “sprezzatura” (nonchalance) — were the true test of aristocrats. At the French court, the ball was a particularly special place, where the aristocracy would parade their extravagant costumes and masks which echoed classical, mythical figures. The rhythmical patterns of the dances influenced the entire French repertoire of this era, both instrumental and vocal music (including sacred music).

The leading musicians during the Sun King’s reign composed obligingly within the confines of strict protocols of style, though they were allowed to give their own personal touch. Marais, Couperin, Visée, de la Barre and members of Hotteterre and Philidor families were among the most competent and high profile musicians during the king’s more senior days.

The suites in this recording are largely taken from the many great musical publications from the Paris of the early 1700s. The publications, which were released “avec Privilège du Roy” (at the behest of the king) reflect the grand balls, concerts, opera and ballet performances at the court and were well-received by a bourgeoisie filled with reverence for the luxurious and illustrious court life.