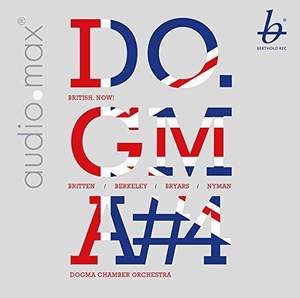 Bryars: In Nomine (after Purcell)

The British Album is the fourth production by the do.gma chamber orchestra, and this project by the eighteen musicians comes with a special treat: Michael Nyman, who has composed music for many films by Peter Greenaway, has dedicated a new work to the ensemble.

It is entitled “When Ingrid Met Capa” and uses the liaison between Ingrid Bergmann and the photographer Robert Capa, whose picture of a falling soldier became the iconic image of the Spanish Civil War. Minimalistic, often motoric motifs characterize this work, and the do.gma chamber orchestra wonderfully captures its compelling groove – of course while respecting Nyman’s personal commitment to writing “nothing but beautiful music.”

“In Nomine (after Purcell)” by Gavin Bryars explores an entirely different world. Purcell’s original was composed for a gamba consort, and this version for string orchestra develops the archaic appeal of the absolutely meditative atmosphere arising from its relation to Purcell’s fantasia. The title of Lennox Berkeley’s “Antiphon” also immediately points to old models.

Also featuring Benjamin Britten's Simple Symphony, this is a great mixture of British works performed by this talented orchestra.